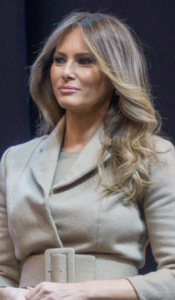 Future First Lady of the United States Melania Trump is the wife of President Elect Donald J. Trump, and was born in Novo Mesto, Slovenia, and grew up in a modest home with her younger sister (and later learned of a half brother).  Her father was a car dealer and her mother a designer of children’s clothing.

Mrs. Trump began a modeling career at age 16 and signed with a modeling agency in Milan.  She would pursue a degree at the University of Ljubljana in Slovenia, but paused her studies to advance her modeling career in Milan and Paris, before moving to New York in 1996.  She has appeared on the covers of a host of prominent magazines including the Sports Illustrated Swimsuit Issue, Vanity Fair, GQ, and others.  She has appeared in television commercials for large corporate brands, and on popular television shows such as The View and The Celebrity Apprentice.  She also runs her own jewelry line called Melania Timepieces & Fashion Jewelry and sells on QVC. 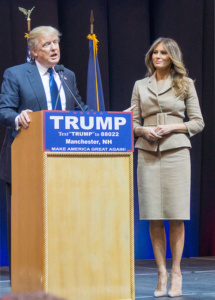 She met Donald Trump in 1998 and they were engaged in 2004.  Mrs. Trump is the stepmother of the Trump children – Donald Trump, Jr., Ivanka, Eric, and Tiffany – and gave birth to Barron Trump in 2006.

Mrs. Trump is fluent in English, Slovenian, French, Serbian, and German, and, in 2006, proudly became a citizen of the United States of America.  She will be only the second foreign born first lady, and the first since Louisa Adams (1825-1829), wife to John Quincy Adams, the nation’s sixth president.

Mrs. Trump cares deeply about issues impacting women and children, and she has focused her platform on the problem of cyber bullying among our youth.