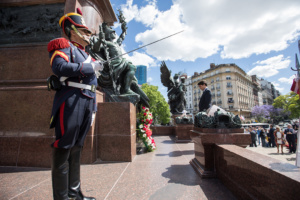 The Prime Minister, Justin Trudeau, today wrapped up a productive official visit to Argentina, where he took concrete action to strengthen Canada’s relationship with one of its largest trading partners in South America.
During the meeting with President Mauricio Macri, the two leaders discussed issues of importance to Canada and Argentina – including the creation of good-paying, middle class jobs, the promotion of economic growth that benefits all citizens, increased collaboration on polar research, and the relaunch of consultative mechanisms on human rights and nuclear cooperation.
While in Buenos Aires, the Prime Minister met with members of the Argentina-Canada Chamber of Commerce and participated in a roundtable organized by the Canadian Council for the Americas.
In these meetings, the Prime Minister highlighted how Canadian companies already consider Argentina an important market and commercial partner. He also noted that Canadian businesses recognize the potential for increased commerce with Argentina as the country implements an ambitious, inclusive, and sustainable economic plan with a strong focus on international trade and investment.